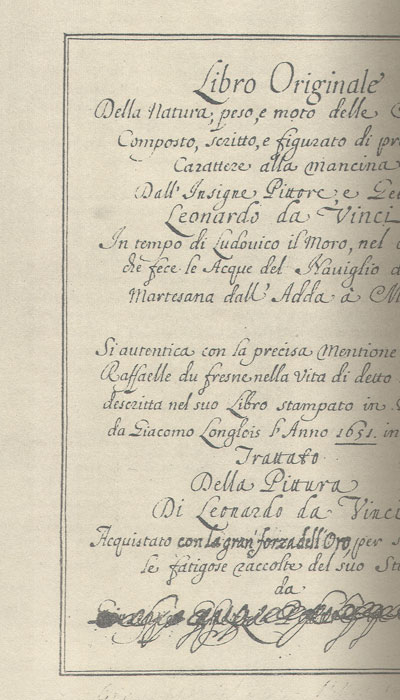 The Codex, which bears the mark 699 The manuscript, and the transaction which accompanies it (ms. 700 of Holkham), appear in the inventory of the library, which the Countess of Leicester, had drawn up in 1773. in Lord Leicesters library, probably arrived there after being bought by Thomas Coke, later Lord Leicester, during one his stays in Italy during his youth. Born in 1697, he took possession of Holkham in 1707, and before he was twenty years old had already stayed many times in Rome, where he was (to recall the dates which are more certain) in February and March 1713, from March to June of 1714, from June to September of 1716, and from January to April of 1717. At that time he used to look for rare and antique things with the help of the sculptor and restorer Cavaceppi, who may have put him in touch with the owner of this Codex, Giuseppe Ghezzi; I owe the indications above to the courtesy of the Librarian of Holkham Hall, Mr Alexandr W. Napier and of the illustrious Mr Léon Dorez, the Curator of the manuscripts of the Bibliothèque Nationale di Parigi, who has made important studies of Lord Leicesters library which are described in his book: Les manuscrits à peintures de la bibliothèque de Lord Leicester à Holkham Hall, Norfolk. Choix de Miniatures et de reliures, publié sous les auspices de lAcademie des lnscriptions et Belles Lettres et de la Société des Bibliophiles Français par Léon Dorez, Paris, Leroux, 1908. Regarding the purchase of antique things made by Thomas Coke, in Rome, and his relations with Cavaceppi, Dorez indicated the preface by Adolf Michelis to the book Ancient Marbles in England, which I have been unable to consult. since one may suppose that this painter (the father of Pier Leone, famous for his caricatures), A vocation, which he began to show perhaps, still being young, in the scrawls found on sheet 4 r. (reversed side) of the codex. Two portraits by Pier Leone of his father are kept in the Vatican Library. dying at a great age in 1721, Cf. Ticozzi (who describes him from the start, less precisely, as an architect), Dizionario degli architetti, scultori, pittori, etc., volume II (Milan, Nervetti, 1831, pg. 166) and the Neues allgemeines Künstler Lexicon del Nagler, 2nd edition, V, pg. 406 (Linz, Mareis, 1905). sold him the manuscript directly. In a letter (cf. Uzielli, Ricerche, etc. (1st ed.), Florence, Pellas, 1872, pg. 115), which Lodovico Antonio David wrote from Rome, dated 15 March 1704, to Lodovico Antonio Muratori, he speaks of a manuscript of Leonardos, which is in Rome; and one may suppose that he was speaking of the Leicester manuscript, still in the hands of Ghezzi. Ghezzi, modestly informed, it appears, on the contents of the Codex, but only vaguely aware of its value, busied himself to sell it, as appears from the boasting nature of the frontispiece to the Leicester manuscript and from some notes, written by an unknown hand (they could be by the same hand that wrote the frontispiece now mentioned) and contained in a notebook in the Milan State Archive. Here, Bonelli found them and published them in the year-book of the Vinci Collection Raccolta Vinciana at the Historic Archive of the City of Milan. Fascicolo II (1906), pg. 91-94. The notebook answers to the name: Miscellanea lombarda (vol. III), and the page we are interested in, cucita là in qualche maniera colle altre[sewn there in some manner with the others], bears the number 91. I have only quoted a part of the document, from the original (see loc. cit. for the critical transcription). , thus providing useful information on the history of the manuscript: In the Life of Leonardo described by the French Raffaele Du Fresne it is said that the opportunity of the Naviglio della Martesana there provided the grounds for writing about the nature of the weight of and motion of water with various designs of wheels, and mills, and water machines to raise the water and regulate its flow. This book, hand-written backwards from right to left, in the fashion of Leonardo, has been found this year 1690 by Sr Giuseppe Ghezzi in a chest of manuscripts and drawings of Guglielmo della Porta, sculptor of the sepulchre of Paul III who as a youth, we know, was a pupil of Gio Tomaso della Porta, his uncle, who taught him to copy various studies of Leonardo da Vinci, which he must have had many of, giving them to his nephew to study, and it is no wonder that Gio Tomaso Here the anonymous writer calls Gio. Tomaso the Gio. Jacopo nominated by Vasari (The Lives, ed. cit., VII, Florence, Sansoni, 1881, pg. 544), who describes him as the pupil of the Hunchback sculptor. Its worth remembering that Cristoforo Solari known as the Hunchback (Christophorus Gobbus) had been called, in October 1510, together with Leonardo da Vinci and the construction engineers, Giovanni Antonio Omodeo and Andrea da Fusina, to give their opinion on the construction of the choir stalls of the Duomo of Milan (cf. Calvi (G. L.) Notizie, etc. Parte III. Leonardo da Vinci (Milan, Borroni, 1869) Document XXVIII, pg. 108; and Annali della fabbrica del Duomo di Milano, III, Milan, Brigola, 1880, pg. 153). was a pupil of the sculptor known as the Hunchback of Milan, a contemporary of Leonardo. S.r Ghezzi has appropriate esteem of it and knows that its true home would be the Milan Library along with that on light and shade which Sr Lando intended to give to Sr Card. Federico Borromeo. The P. r. should be most pleased at such glory, but to purchase it and donate it, finds himself short of money to buy a study of water, so that it must wait until such money is made. The information, found in this document, on how Ghezzi came to be in possession of the manuscript, is even more pertinent (despite the omissions and inexactitudes which it gives rise to) perhaps in the light of the facts that the prank by which a previous inscription on the frontispiece already mentioned was scraped